Entering the onsen, or Japanese hot springs, is not a as simple as unclothing and hoping into the water.
To Japanese, taking part in the onsen requires you to know about the rich culture and history behind them as well as to be familiar with the rituals and customs of the onsen.

Before scientific research showed that the mineral properties and contents of the natural hot spring waters had the ability to heal; ancient people of Kinosaki believed that the healing abilities of the onsen was the power of the onsen guardian. However, if you were to look back at the record number of debilitated people that came to Kinosaki in pain and left after just a few days of soaking in the onsen you too will believe that there is more to the mystic waters than just minerals. 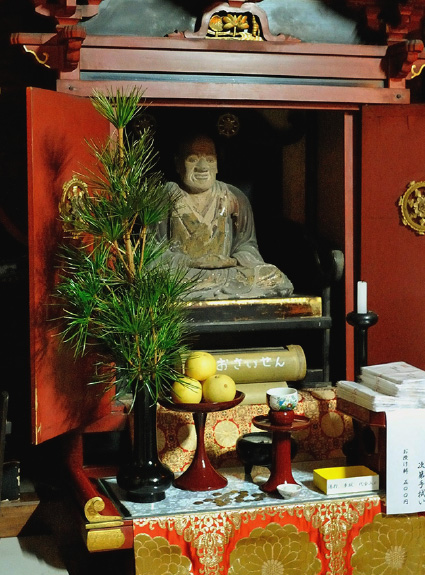 Begin your journey to the 7 mystic
onsen of Kinosaki by first visiting
consent the onsen’s guardian.

In ancient times, when the onsen in Kinosaki were first discovered, they were considered gifts from the guardian deity. This made the waters sacred. Before you could enter the waters you had to hike the mountain to Onsenji Temple. Here you would pray to the onsen guardian for them to allow you to enter the sacred waters and be healed by them. Then you would have received a “yu-shaku”, a type of ladle, that would act as proof that you had visited the temple and would be used as a ticket to enter the onsen. Back then, anyone who did not have this ladle was denied entry to the onsen. 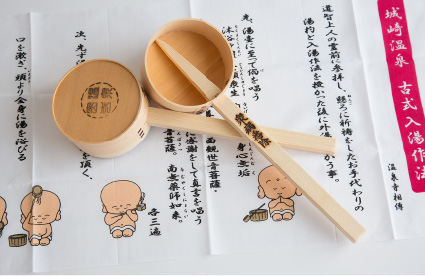 While the ladle and a visit to the guardian temple is not required today in order to enter the onsen, it is highly suggested. The hike to Onsenji Temple is very picturesque and is not a difficult climb, taking only about 20 min to get to the temple. There is also a gondola that will take you up to the temple, if you prefer. You can also still obtain, or rather purchase, the ladle at the temple and it makes a great souvenir.

Modern entry requires you to purchase a ticket for each onsen. While those staying at a ryokan or hotel in Kinosaki are usually given a pass to all 7 onsen, included with their stay, those who are not staying in Kinosaki can still get a day pass to the onsen. For around 1200 yen you can purchase a day pass from anyone of the bathhouses that will grant you entry for the day to anyone of the 7 onsen bathhouses.

There are several other hot spring towns in Japan, but very few have so many public bathhouses of varying style in such close proximity. All 7 of the onsen bathhouses can be walked to from the other. If you have the time, are up to the challenge and want to feel the cleanest and most relaxed you have ever felt in your life, try Kinosaki’s “Onsen Meguri”. Meguri is a Japanese term meaning pilgrimage, in this case you walk around to and soak in all 7 onsen bathhouses.

To help you find your way to each bathhouse, you can purchase a map with a stamp collection section on the back. At each bathhouse you will find a special stamp to put into your book. This stamp book can be purchased at the Ryokan Information Center in front of Kinosaki Station for 50 yen. Some ryokan also offer the chance to receive or purchase a commemorative rice scoop or set of chopsticks for completing the onsen pilgrimage, ask your ryokan if they offer this option and for more details.

About the Individual Bathhouses 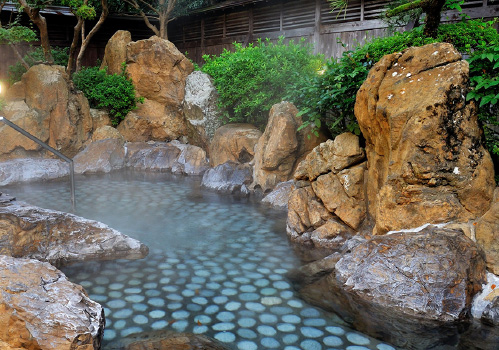 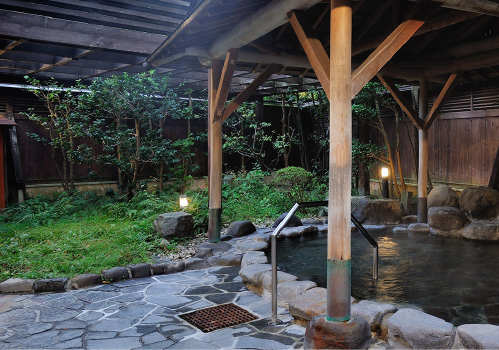 Kono-yu is the bath that will bring you happiness in your marriage and longevity.
This is the oldest hot spring in Kinosaki. It is said that it was discovered when a villager found an oriental stork healing its wounds in the waters.
The onsen is a quiet bathing sanctuary, set away from the busy streets in the back of the town. Relax in the outdoor bath surrounded by lush natural surroundings and fresh air. 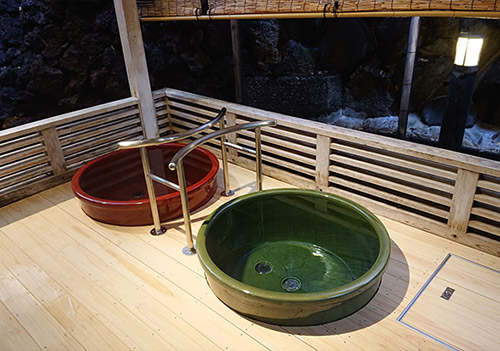 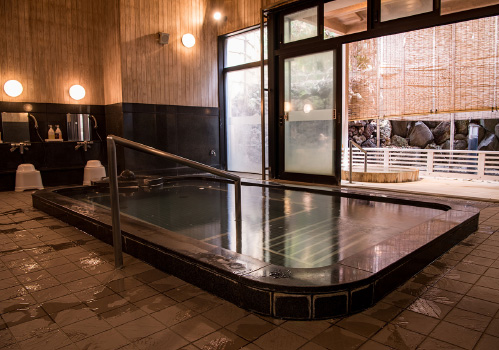 Mandara means the enlightened mind, and is named so because the waters of Mandara were supposedly brought forth after a holy priest, Dochi, prayed continually for a thousand days.
The outdoor bath is a ceramic barrel bath. Enjoy the fresh air while you look out onto the beautiful mountain side. 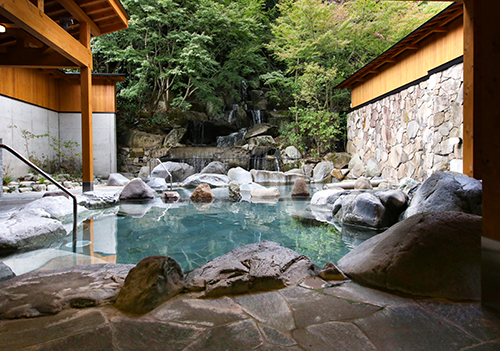 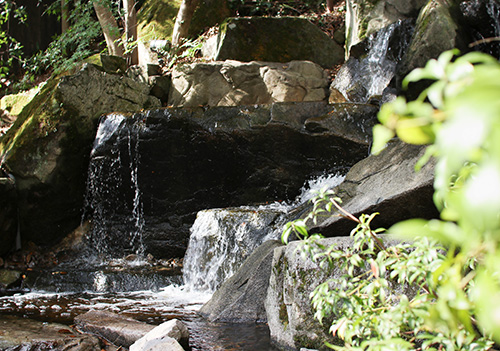 Goshono-yu, also known as the “Water of Beauty”, brings luck in love and protects you against fires.
Goshono-yu was built in the likeness of Kyoto’s Imperial Palace. The foyer and lounge area are accessed by beautifully painted screens and the panels of the high ceiling are painted with Japanese flowers. 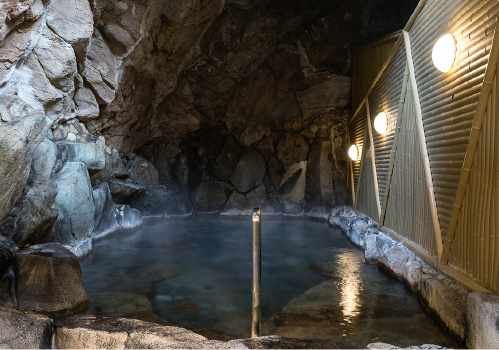 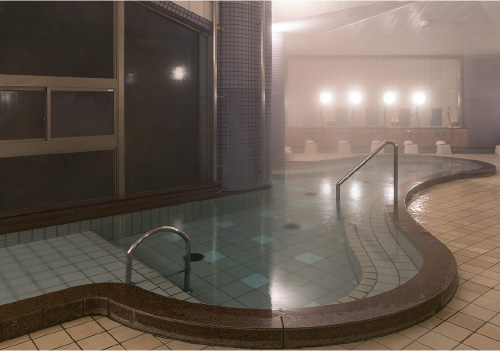 The architecture resembles that of a kabuki theater and is a popular bathhouse landmark. This bathhouse features a cave made of natural boulders and soft ambient lighting, perfect for those wanting a calm and relaxing soak. Come and see why this bath is called “Ichino-yu (number one bath)”, a name given by a well-known doctor of the Edo era, after he had experienced the positive effects of the waters firsthand. 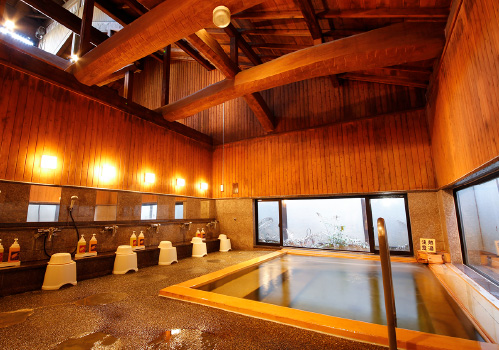 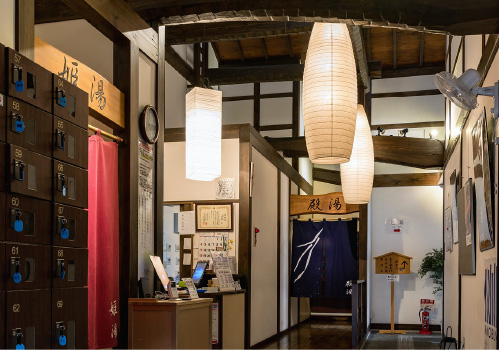 Yanagi-yu is said to ensure fertility and safe childbirth for woman. Yanagi is Japanese for weeping willow, and gets its name from the willow-lined street that runs in front of the Yanagi-yu.
This is a cozy bath house. The interior is a classic twist on modern-Japanese style. The rustic wooden interior, from the walls to the bath made from cypress, provides a warm and relaxing experience. 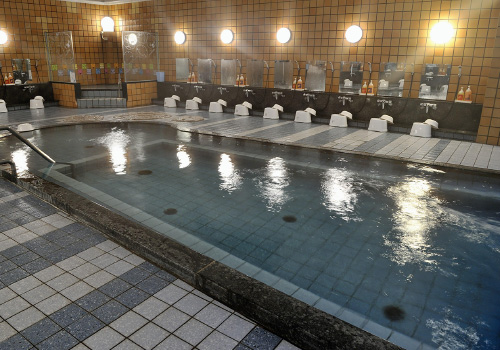 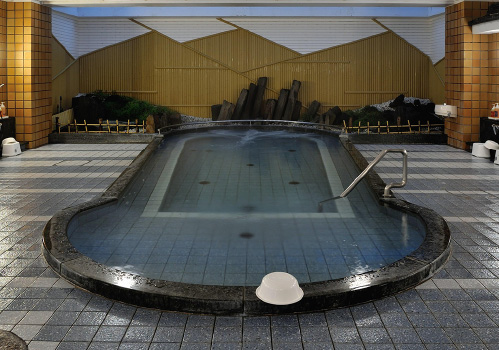 The design of the building was inspired by a Japanese lantern. The hexagonal windows are shaped like the volcanic rock formations of Genbudo cave. It is a local favorite, with many families from the neighborhood still preferring to use this retro style bath house to relax before turning in for the night. 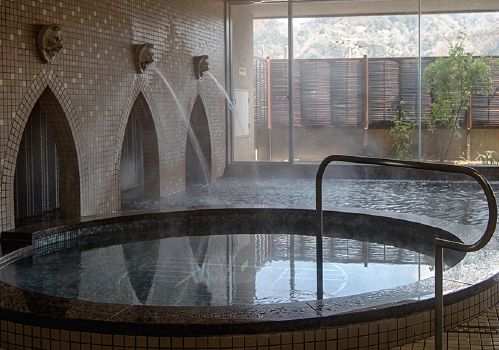 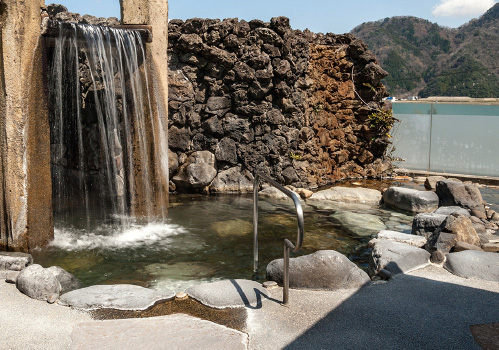 Located directly next to the station, this onsen features a beautiful panoramic view from its outdoor bath located on the third floor observation deck. Step into the sauna where aromatic herbs fill the air. Relax in the beautifully-designed outdoor baths and enjoy the modern amenities of this onsen.